Mom and I began our trip from Tulsa at 3:30. We flew to Dallas and then to London without incident. We arrived in London (Heathrow) around 10:30 and then were told that American Airlines had messed up our tickets and British Airways wouldn’t let us board the 12:30 flight. So, we spent the afternoon in a nice lounge until American fixed the problem and got us on the next available flight. We got to Munich around 9:30 and to Chris and Sigi’s around 11:30. 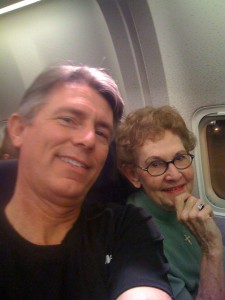 Mom and Me on Plane

Munich is 7 hours ahead of Nashville. We spent the day napping, eating, and adjusting to the lack of sleep and the time change. Sigi had to work today.

Sigi drove me to the Tannheimer Tal. We will ski there tomorrow. Today we just rented skis and boots for me. Probably best we didn’t ski. I’m still getting over jet lag.

Today I fulfilled a life-long dream of skiing in the Alps. Sigi took me to a place called Tannheimer Tal. It’s just inside Austria (Osterreich) south of Kaufbeuren. It has been more than 10 years since I skied and I was not in shape at all. The slopes there really ate my lunch. There wasn’t enough snow for me and it was too icy. Consequently I spent a good portion of time on the ground and wore myself out just getting up and putting my skis back on time after time. I felt like a complete beginner. By the end of the day I was absolutely spent. But, it was a great day nonetheless and I’m so grateful to Sigi for taking me and watching out for me! 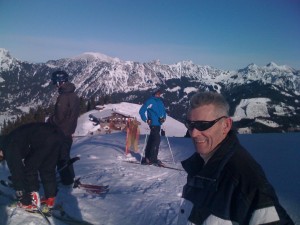 Today was a great day. Sigi and I went skiing at a place called Breitenberg near Pfronten in southern Germany. I was still sore from Wednesday, but I did much better today than I did the other day. The slopes were better, but still more icy than I would like. The good news is that I fell only twice. 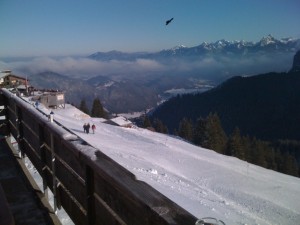 View from Cafe at Breitenberg

Saturday, December 27, 2008
Today was mainly a day of rest. A friend of Chris’s, named Bridget came over and visited this afternoon. After dinner, we played Skip-Bo.
Sunday, December 28, 2008
Sigi took me skiing at a big resort further into Austria. Bridget went with us. The conditions were the best so far and I enjoyed it the most of the the three days. I was tired though, by the end of the day.
Monday, December 29, 2008
Another day of rest and recovering from the prior day of skiing. Mom and Chris and I went into town and did a little shopping and had coffee and a neat little cafe that has been in Kaufbeuren for a long time.
Tuesday, December 30, 2008
Sigi and I drove to Klugenfurt, Austria today to deliver some packages to a friend of his named Rudy. The drive was just spectacular as we drove through the mountains. We got there around 6:00. Rudy runs a B&B with a bar and also is a great butcher. We stayed in his rooms.
Wednesday, December 31, 2008
We drove back to Kaufbeuren, but took a longer route that took us through more mountains. The scenery is just stunning. We play Skip-Bo this evening and then stayed up for the New Year. People can shoot fireworks in the Kaufbeuren city limits, so everyone, it seems, had rockets and fireworks to enjoy. It was amazing to stand in the back yard and have fireworks going off literally all around you. No single person or family is doing anything as spectacular as a municipal display back home, but the fact that EVERYONE is doing it makes it really impressive. We were literally in the middle of a city-wide fireworks display!
Thursday, January 1, 2009
We had planned to ski today, but the weather is bad so skiing isn’t a good idea. Sigi and I returned my rented skis and then got home in time for lunch. I rested and read the rest of the day.
Friday, January 2, 2009
Weather continues to be a problem. Roads are icy and more is expected, so we decided to drive to Munich today during the day and spend the night there before catching our early flights tomorrow. We got there around 3:00. It was a very nice little hotel. We crashed early because we have to get up early.
Saturday, January 3, 2009
We got up at 3:00 am and caught the shuttle to the airport at 5:30. I was nervous about getting checked in and through security at the Munich airport without Chris or Sigi, but we made it fine and the flight was on time. We flew to Brussels where our flight was delayed by a couple of hours, but it was no problem since the connecting flight in Chicago was already going to mean an even longer layover. Finally got to Chicago and still had about 5 hours to wait until the flight to Tulsa. Got into Tulsa right at 10:00 pm where Mel met us and drove us to Bartlesville. We feel good but are tired.
Sunday, January 4, 2009
Mel and Mom drove me to the airport early to catch a 7:30 flight. Connected through KCMO and finally got home later in the day. I’m tired, but it was a great trip and I appreciate all that mom, Chris, and Sigi did to make it so enjoyable!
Share | Tweet | print | email
Category: Journal